On 11th August we hosted the ‘blokes and sheds visit’ and what a great turnout of Guild members, all busy making shavings.
I am sure the participant’s on the tour would have been impressed with how tidy our shed was and the wide variety of work being undertaken, from scroll saw work, carving, flatting a slab with a router, lathe work and furniture making, just to name a few of the activities that were being undertaken.
And our kitchen was used to provide the customary pies, scones and drinks.
The library and exhibition area looked a treat also.
So all in all a great turnout and a great advertisement for the Guild.  Well done to everyone involved!
Thanks, Simon 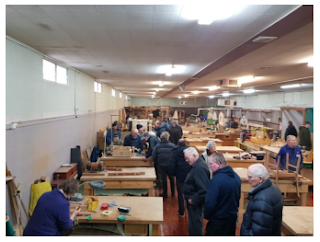 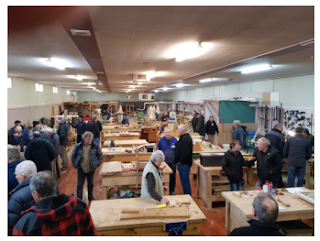 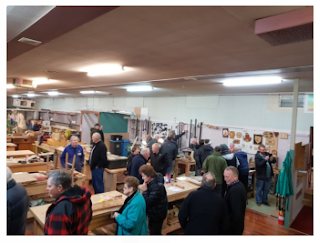 Last year we made a 4 lane track and starting gate for the local Cub Association. The Cubs drew out the shape of a car and we cut them out, the cubs then painted up their cars and fitted the wheels and had a great night racing the down the tracks.
This year a new intake of Cubs needed new cars cut out, this was done on the 11th and the cars were picked up.
Another worthwhile event for the Guild to be involved in.

Again this year we participated in the annual Kidzone Festival.
We were located in the music room which had better acoustics so it wasn’t as noisy as previous years but still rather noisy. Again this was a success for the Guild and I am sure the members that volunteered got a real kick out of seeing the children actually make something they could be proud of.
The jigs for making the boxes proved very  successful  as it starts the boxes off in a square state and greatly improves the chances of getting them right first time.
If only we could  have a jig for putting nails in straight and not too close to the edge of the timber.
But again all in all a great success for the Guild.
I have filled out the survey form on how we found it and what improvements could be made for next year. The main one will be to have a more solid   table top as the existing table tops they use are   rather bouncy.
Again my thanks to all the members who assisted from cutting the toys out and packaging them up and a special thanks to those members that  volunteered on the days of the festival.

Neil has been working away with the Funders and he has secured some funding for electrical work and part of the operating cost budget.  We are waiting to hear back from other funders.

This has been a bad month for me as I seem to have missed more workshop time then enough.
A couple of problems have arisen this month with the large band saw having been a problem that all started with poor usage.  The band was damaged and when I went to replace it, both guides had been incorrectly adjusted which resulted in both thrust bearings being damaged and in need of replacement.
That was the easy solve but getting a band for a replacement was a different story as our normal supplier has gone out of business so I had to shop around. Our usual machinery supplier only stocks bands to fit the saws they sell and made to measure bands can cost up to $100.00.
I think we may be on the right track now but as there is no saw doctor in the town, there has been delays. Next problem was the small thicknesser which had the blades fitted incorrectly causing a poor finish so the blades had to be removed and refitted correctly. Please do not attempt repairs without asking me first.
Other than that all seems to be going well and the visit by the bus loads from the Boys High Tour was a good show and to see us working was an eye opener for some as was the display of work.
The pies and pints were a good reward for those that came and showed the visitors what we are about. Great to see more members working on their own projects or helping those that need assistance. Keep up the good work.

Visitors to our workplace on Sunday 11th August

This Sunday, the 11th August, we are hosting either 2 or 3 bus loads of keen people that are going on the ‘blokes and sheds’ tour.

Our shed, Woodworkers clubrooms, is also on the list.

The times the organizers have given me are:-

Note—these times are subject to  change.

I would like to see as many members working on their projects as possible and of course be prepared to explain what you are doing.

Each bus load will have to start with a quick health and safety chat and I trust that we can have a member to chat about the following subjects:

Þ Other community type projects we have been involved with